With extended digitization, the intralogistics company montratec with headquarters in Niedereschach (Baden-Württemberg, Germany) is leading the intralogistics solutions of the intelligent montrac® conveyor system into the future. 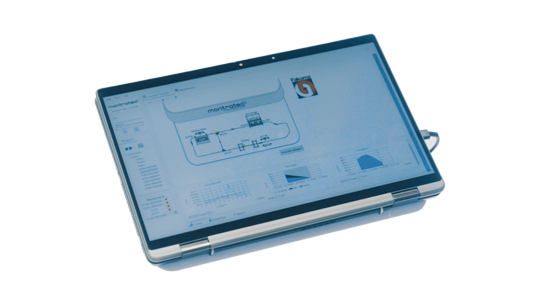 The montrac®-flow-controller app runs on Android and iOS and enables monitoring and control of the montrac® systems via remote access.Photo: montratec GmbH

The high-tech company presented major innovations at the international trade fairs ‘Fakuma’ (Germany) and ‘The Battery Show Europe‘ (Germany). Sven Worm, CEO of montratec GmbH, summarized: "Our current focus is on the two new montrac® transport shuttles for payloads of 40 kg and 70 kg as well as the app for the montrac®-flow-controller - which for the first time enables round-the-clock remote monitoring and control of the montrac® system. Thus, the digitized and autonomously controlled montrac® solutions influence the trend of rail-based transfer systems towards digital transformation and process automation."

Due to the intelligent control unit montrac®-flow-controller (mfc), the autonomously steered montrac® transport shuttles are at the right place at the right time and independently find the optimal route to the respective transport destination. The associated app visualizes the graphically prepared data and thus enables full transparency of the respective status of the montrac® system via remote access. In addition to monitoring and notification, the app also offers controlling system interventions via WLAN. For example, the app can be used to determine the time for predictive maintenance based on statistical data collection and evaluation.

To run on both Android and iOS, the app was developed on the Xamarin platform. Like the montrac®-flow-controller, the app also communicates with a SQL database on which all live data of the respective montrac® system is stored. In addition, a local database with individual user settings is integrated into the app. This in turn will enable customer-specific access authorizations and function selections in the future.

Another technical highlight, which was shown as „preview“ at the trade fairs, are the newly developed transport shuttles montrac®-W040 and montrac®-W070 with significantly increased axle loads and reinforced carriages with individual height adjustment. For the first time, the montrac®-W070 shuttle can transport goods weighing up to 70 kg smoothly without collision, both forwards and backwards. Like every montrac® shuttle, the newly developed 'high load' shuttle types also act autonomously and, due to intelligent high-tech control, independently find the optimum route aiming to increase productivity.